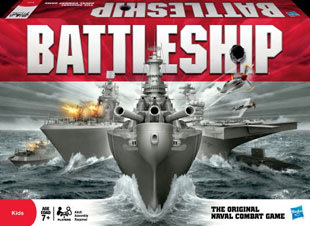 We can all remember family game nights, and one of the staple games for these occasions in my family was Battleship. It is a game that has been played by a huge part of the population and has been enjoyed for decades. The game has gone through many changes over the years, with the addition of built in sound effects, light up boards, and new game rules. This year however the game is taking on a form it has not previously extended into.

The teaser trailer for a Battleship movie features Liam Neeson, Taylor Kitsch, and Rihanna, and the movie is due to be released in 2012. This debuts a new twist on the classic board game. The movie will not follow the traditional game play, but the concept of naval warfare is the central theme of the movie.

The trailer denotes that naval battleships will be fighting against a threat that is literally not of this earth. They locate an unidentified ship floating in the water, which it is later exposed to be an alien vessel ready to wage war. The special effects are impressive in the trailer, and you can expect that the movie is full of impressive visual moments.

We will keep our ears open for new information regarding this game inspired movie, and the minute we hear something you will know. This has inspired me to dust off my version of Battleship, pull it out of the closet, and replay one of the most popular board games in America. View the movie trailer here, and pull out your copy of the classic board game while you do.