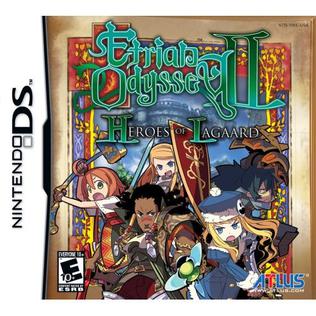 The successor to the first Etrian Odyssey is making it's way to Nintendo DS and Nintendo 3DS early next year on February 12. The game will be released on both platforms as separate titles. The first of which is a Nintendo 3DS remaster of Etrian Odyssey 2: Heroes of Lagaard.

The remastered edition includes new dungeons, remastered graphics and various system improvements, making it the most definitive edition available for you to get your hands on.

The second game is the Untold portion - this is a brand new story mode that gives players a fixed party to play with. There's voiced dialogue and animated cutscenes that takes a look into the bittersweet story of the Fafnir Knight and Princess Arianna.

Untold will have a strong focus on the characters and their own involvement with the Fafnir Knight's story. As the game unfolds, your part will adventure into the ruins of and the Yggdrasil Labyrinth. The party includes Flavio the protagonist and two accomplices, Bertrand and Chloe.

Etrian Odyssey 2 Untold will have varying levels of difficulty that newcomers and veterans alike will enjoy. On top of a hardcore Expert mode for the die-hard veterans, there is also a Picnic mode that makes the game a walk in the park - this is a great option for those that just want to enjoy the story of the game and not be presented with difficult within the game.

The Fafnir is also added as a brand new character class and will only be available in the game's story mode. The Fafnir has the ability to transform into a beastly demonic form that can enhance the Fafnir's attributes and abilities.