Two of the most quintessential females in gaming history (namely, Nintendos history) have only been matched up to fight each other before in games drastically affected by a gamers skill, and not their inherent character traits or abilities. So, because games like Super Smash Brothers dont truly justify who would win in some sort of fighting pageant between the two without the overwhelming differences of skill between varying gamers, I decided to measure up the two based on a variety of different factors.

I have to give this one to Peach, because, frankly, it looks like she spends a lot more time on it (and I always appreciate someone who takes their time to look good, as I tend to spend no more than 5-10 minutes on my own hair), and, she just never has one blonde curl out of place. No matter how many times she just happens to be in a different castle, her locks stay in tact, something I think all girls secretly envy.

Im a pink girl, but Im way more of a purple girl. And Zeldas dress, shoulder pads, corset thing shes got going onâ€¦.its just cool. On top of it, Zelda gets two outfits, the second being that of when she transforms into the mobile and tough Sheik. Sure, Peach can float at heights that even Mario would envy with that Marie Antoinette dress of hers, but shes stuck with the one. 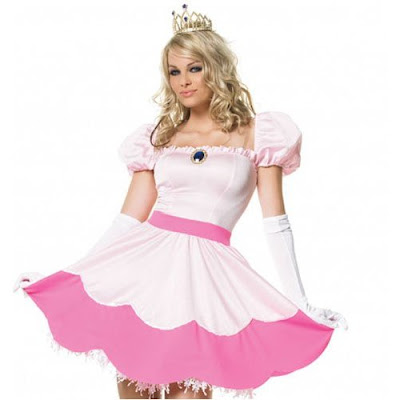 I just think its way too tough to Cosplay any Zelda character, especially Link or Zelda, without looking creepy and old (no matter what the players age). Peach, on the other hand, comes in a variety of different Halloween costumes available for women of all ages.

This ones easy. Zelda can transform back and forth into two different personas, completely surprising the enemy at any moment while displaying a variety of different battle moves per form. All Peach really has is a parasol. Also, Zelda is more useful because she provides Link with hints and goodies instead of waiting to be saved by her boyfriend. You go girl!

Again, Zelda provides Link with tips, letters marking him as a VIP, as well as cool goodies like light arrows. She also actually helps in the battles against Ganondorf with her magical powers, and certainly gives you better hints than Navi, without telling you to LISTEN! Peach sits around on top of the castle eating crumpets with Bowser probably, until she pretends she needs rescuing when Mario approachesthen again, maybe Peach really does have it all thought out in that caseâ€¦.

I dont think anyone can be surprised with this one. Zelda would kick Peachs poofy pink butt out of the castle in an instant, and then ride off into the distance playing the Ocarina and showing why she doesnt always need a man.